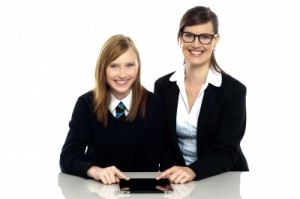 Teaching and the Neurogram®
As with all people who work with groups of other people, teachers benefit a great deal from working with the Neurogram® model. Our brains look for what is the same. This is an evolutionary trait. It is very handy to recognize bears in general as being dangerous rather than having to find that out the hard way with each individual bear. This is the reason that when we work with other people, even though we know that each individual is unique, we still see them as basically the same as ourselves.

In reality there are nine types of humans that differ radically from each other. As such, only a small group of people are actually quite the same as you are. When you work with groups of people most other people will radically differ from the way you look at the world, what drives you and what makes you tick. We experience this radical difference by misunderstanding others or just finding them plain “dumb”. It is not that they are really dumb. It is that our brain can’t imagine acting like them for it conflicts too much with our perspective on reality and our model of the world.

This process is especially acute in the classroom for the simple reason that today there is a strong trend to diagnose others who behave differently from us psychiatrically. The rise in ADHD and autism indications have very little to do with ADHD and autism and much more with teachers misunderstanding the radical differences in other people. Let me be clear. ADHD and autism are real and can be seen on brain scans. Yet most people who are indicated with ADHD or autism turn out only to have a different personality type than the person diagnosing.

As a generalisation, a lot of problems in the classroom flow from the teacher misunderstanding the differences between his own personality and the personality of his students. Fortunately, you can learn to spot personality types from a really young age, three year olds in the case of the more outspoken types, but for every type from the age of eight.

Learning how all nine personality types look at the world and what drives them, makes teaching much easier. Some kids like to study on their own. Other kids like to run around and be physically involved. This difference has nothing to do with good students or bad students, but only with differences in their personality. The same goes for problem makers versus problem solvers. Or hard to influence or easy to influence. And the list goes on and on.

To sum up: as a teacher you benefit greatly from learning the Neurogram® model. The Neurogram® helps you to quickly assess where a student is coming from and how to get him to go in the direction where you as a teacher want him to go. The Neurogram® model has several ways of covertly discovering personality types and each personality types comes with a bunch of strategies to point the person towards learning, behaving well and in the right direction in general. All this tailor made for the specific personality you are dealing with at that moment. In short, the Neurogram® is a very valuable tool for teachers.

For a more in depth view of the Neurogram:

To get the most out of it:

The Neurogram is an initiative of:
The Institute of Unconventional Wisdom

Sales are handled by our UK partner:

Some images courtesy of Freedigitalphoto.